Kent State and Comics, a look back. Part 2 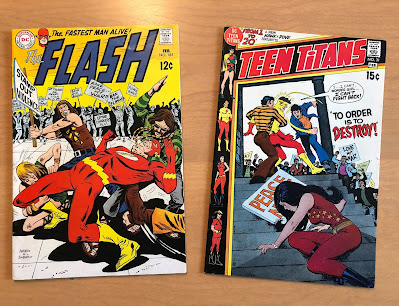 Continuing my examination of how student protests were depicted in mainstream comics during the Kent State Era, here’s two examples from DC Comics, Flash #185 and Teen Titans #31.
The Flash has a pub date of February 1969, just before the mass campus unrest in the Spring of that year, including the events at Kent State that led directly to the Guard moving in to crush dissent a year later. The Titans has a pub date of February 1971, so it was on the stands in Fall 1970, just six months after the Kent State Massacre. So what we have here is an interesting before/after Kent State comparison.
On both covers, student protestors are depicted as a violent mob, using a predictable image of the hero getting whacked with a “Make Peace, Not War” sign. How many times did rightwing political cartoonists use THAT tired gag? The editorial leadership at DC Comics in 1969 was pretty reactionary. Some, like the infamous Mort Weisinger, loathed 1960s youth and submarined any attempt to portray them sympathetically!
DC was also notorious for dreaming up provocative covers FIRST, then writing a story to play off the cover. Usually this resulted in a pretty shitty book, and Flash #185 is certainly an example of that. The story? It has nothing to do with student antiwar protests at all!  Instead, it’s a goofball tale of aliens stealing the Earth’s tallest buildings, including the Eiffel Tower! It’s total nonsense. Written by comics veteran Frank Robbins, too, who penned many classic Batman stories in this era. This one is a real turd. Oh well. 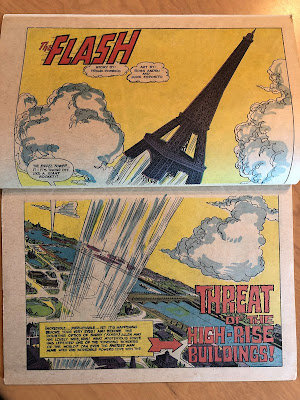 Since antiwar protestors are present only on the cover, so let’s file this one under WTF.
Teen Titans #31 is also a crazy book, but at least the cover is related to the story. The Titans visit a college, where an evil university president is forcing students to undergo brain operations to make them compliant and thus control campus unrest. 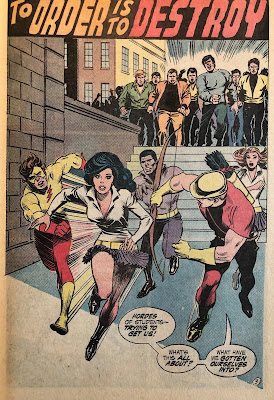 No. really.
This story, however, portrays students as innocent victims, and the authorities as the bad guys! This is the first time THAT happened in a mainstream comic book. Over at Marvel, Stan Lee always made his stories about student protests politically ambivalent. Students were well-intentioned, the authorities were reasonable, why can’t we all get along blah blah. 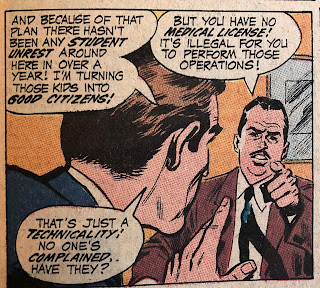 There was no way in hell DC would have allowed this book to see print a year earlier, but a lot had changed in the space of 12 months at DC. Old conservatives like Weisinger retired (or were shoved out the door). Publisher Carmine Infantino cleaned house. A big influx of young creators was brought in, with a desire to tell stories that mattered to them. Is Titans #31 a reaction to Kent State and the mass campus unrest of Spring 1970? Sure seems that way.

The author of Titans #31 is Steve Skeates, one of youngest DC writers, only 28 here. The Titans were one of DC’s “relevant” titles, tailored to appeal to progressive youth. Skeates also wrote Aquaman at this time, who became an environmental crusader, and Hawk & Dove, a wacky concept about the country’s political divide. He wrote a lot for DC’s wonderful gothic horror line and then became one of Warren’s busiest writers in the 1970s, penning dozens of stories in Eerie, Creepy and Vampirella, before burning out and leaving the biz.
In any case, this is a pretty daring story to put on the spinner rack at the height of Nixonian paranoia about the student left. 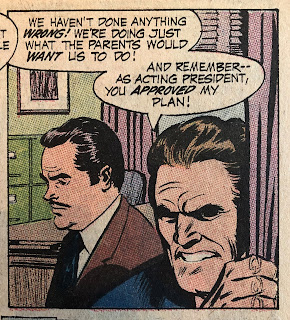 "Just what parents would want us to do"... lobotmizing their children! Honestly, that sentiment probably wasn't that outlandish in 1970! 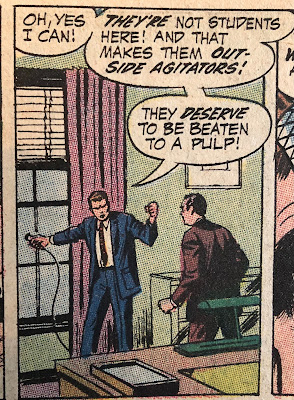 This dialogue is chilling, because "outside agitators" were cited by Ohio Gov. Rhodes as one of the reasons for sending in the Guard to crush protests at Kent State. It was a common theme by reactionaries. A large secret cabal of "professional radicals" was going from campus to campus, stirring up the otherwise docile local youth, and creating chaos. It's spooky seeing this stuff filter down into pop culture, knowing how deadly serious it was in real life. 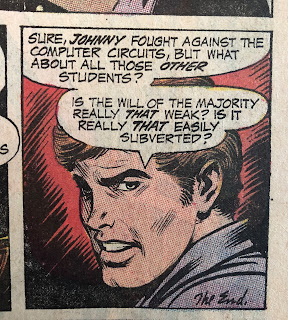 This (above) is very much still a question. After Trump and the past several years, I fear a large segment of the population IS that easily subverted. Prescient stuff from 50 years ago.
Note, however, that the plot in all these comics stories I’ve been examining is always the same, no matter the publisher, Marvel or DC. It’s never a portrayal of legitimate protest over the Vietnam War. It’s always misguided students being manipulated, or mind controlled, by insidious villains. Over and over comic book writers use that cheap plot device, because God knows no student in 1970 could have a REAL beef with the government, right?
Posted by Derf Backderf at 2:08 PM