Kent State and Comics, a look back. Part 1

I'm fascinated by how the Kent State Massacre, and student antiwar protests in general, were dealt with in comics back in 1969 and 70.
Today I'll look at the political cartoonists. The Kent State Massacre happened on Monday, May 4, giving cartoonists ample time to weigh in that week. I was surprised by what I found. Very few did! I scoured newspaper archives online looking for examples and found very little. I guess this event was too hot a topic. The first reaction, after all, from mainstream, middle-aged America is that "we should have shot MORE." In a Gallup Poll a week after the Massacre, almost 70% blamed the students for being shot, and not the soldiers who shot them. I suspect newspaper editors were keenly aware of this sentiment, and a majority probably shared that view, and warned their cartoonists to back off.

But I did find a few examples. Let's start with one that appeared in The Cleveland Press the day after the Massacre. Cleveland is a mere 38 miles from Kent and the student body was full of Cleveland kids. This cartoon is by longtime cartoonist Bill Roberts, age 56 in 1970. He was right-of-center on most issues,  in keeping with the politics of the big afternoon daily. The Press, like most afternoon papers, was a "working man's paper." It certainly wasn't psycho rightwing, like media is today. Perhaps "traditional" would be a more apt description. Certainly, the paper was no fan of student radicals, or of the Woodstock Generation in general. If 20somethings were written about at all in 1970, it was dismissively, or with outright mockery.

This cartoon, well, doesn't really say anything at all. Yes, students are dead and, yes, that's a tragedy. The problem with the Kent State story, of course, is that it unfolded piecemeal over those first few weeks, and a lot of the official statements and assertions were either wrong or outright lies. The first 20 statements by Guard leadership, for example, were all lies, as they desperately tried to cover up their crime. Pretty tough to draw a cartoon about something when you have no clue what actually happened. 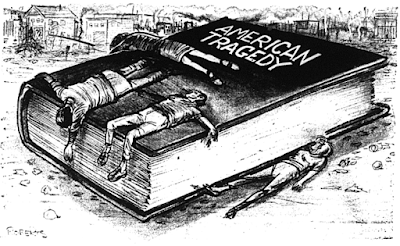 Here's one from Pat Oliphant, one of the "new breed" of political cartoonists who transformed the genre, and moved it away from the dry, humorless cartoons of old pros like Roberts. Having said that, this is not one of Oliphant's better efforts. What exactly is happening here? The SDS Radical is pulling on the Cheese of Anarchy. What exactly IS the Cheese of Anarchy and why would SDS want such a foodstuff? They're about to get clobbered, but wouldn't the mousetrap be enough? Why is there a spiked iron ball attached to it? I suspect just so Oliphant had a place to write "reaction." 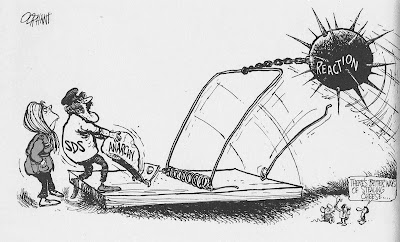 Ray Osrin of the Cleveland Plain Dealer penned this one (below). Again, it says nothing, but even the most reactionary subscriber has little to object to here. Kent State was the most divisive event of the 1970, a year that was abysmal all around, one of the worst years we've ever had. In Ohio, that divisiveness over Kent State was amplified many fold. This, after all, happened in our back yard. For example, the Akron Beacon Journal (which didn't have a political cartoonist in 1970) won a Pulitzer Prize for its coverage of the Massacre. But readers were so incensed that the Beacon refuted many of the Guard's lies, that subscribers cancelled in droves!

The point being, cartoonists in these parts had to tread very softly. 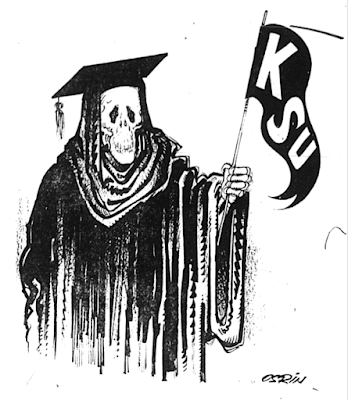 Below is a cartoon by Cy Hungerford of The Pittsburgh Post-Gazette. Hungerford was 82 years old in 1970!  Dude was born in the 19th century! As you can tell, he was no fan of the whippersnappers on campuses. This one is a total piece of shit. We've got Death, dressed from the waist down as a Guardsmen, and from the waist up as a student protestor, running onto the Kent State campus.

This one reads, and looks, like ol' Cy scrawled it out in 5 minutes, which is probably exactly what happened. 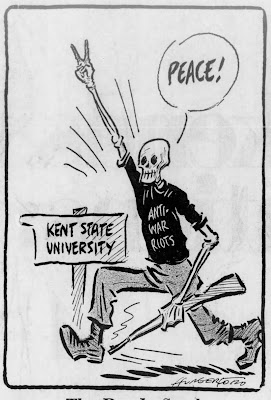 Wish I had a clearer copy of this one, by the great Bill Mauldin. This is from a few months after the Massacre, when a state grand jury issued indictments. It was convened as a kangaroo court by Ohio Gov. Rhodes, the Nixonian strongman who was most to blame for what happened at Kent State. The judge was a Rhodes ally, the prosecutors were, too. In the end, the grand jury cleared all the soldiers who fired, and their officers, and completely exonerated Rhodes, and instead indicted the students who were shot! It was a travesty. All of the indictments were eventually abandoned by prosecutors.

Mauldin cuts right to the heart of it. Heavily-armed soldiers shot and killed students who were armed only with words. 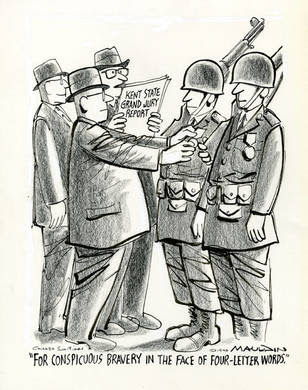 Below is a cartoon by Mike Peters, the renowned cartoonist of the Dayton Daily News. Peters was never one of the more savage political cartoonists and this one is fairly typical of his work. UN Observers sent in to keep the parties separated, just as they were in Northern Ireland in 1970, at the peak of The Troubles there. Peters isn't far off equating what was happening in 1970 America to civil war. We were on the knife's edge of that. 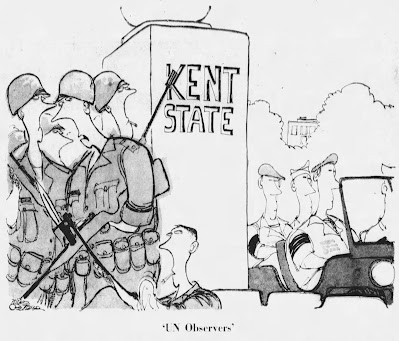 Another Ohio cartoonist, and another old-timer, L.D. Warren, penned this one for the Cincinnati Enquirer.

Well, he's certainly making a statement here, placing the blame squarely on "violent" student protestors. The problem was, of course, that the protestors on May 4 were peaceful. It was the Guard that was violent. The 400 protestors on the Commons that day were merely chanting, as was their right of free assembly in a public space on a public university that was open. The Guard gassed them, and marched on them with bayonets and batons, beat anyone who didn't move fast enough, and then shot them.

Cincy was a pretty conservative place in 1970. I'm sure the readers nodded their approval at this one. 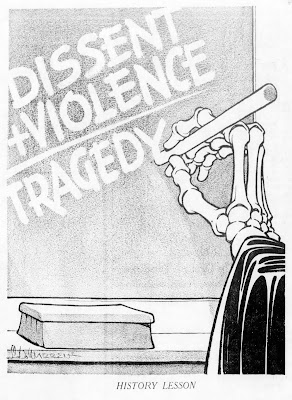 And finally, here's one from Don Wright, the great multi-Pulitzer-winning cartoonist for The Miami News. He's working from the relative safety of sleepy South Florida, true, but at last here's a powerful cartoon. This appeared on Wednesday, May 6, two days after the Massacre. As I wrote, much was still unknown, but Wright astutely zeroes in on what WAS known: the students were unarmed and the Guard killed them without justification. 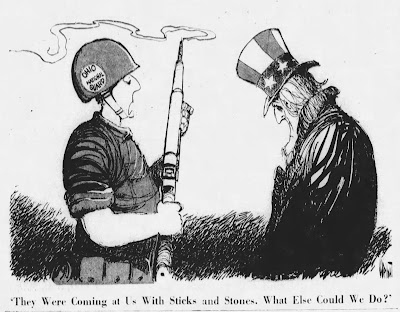 Posted by Derf Backderf at 2:07 PM